If you are a few years out from applying for your MBA (or even just one), there’s a lot you can be doing right now to increase your chances of acceptance and build a profile that admissions officers can’t overlook. Fortuna Expert Coach Cassandra Pittman, Columbia Business School alumna, former INSEAD assistant director and LBS admissions officer, joins Director Judith Silverman Hodara, former Wharton head of admissions, to discuss top tips and MBA admissions insights.

Judith Silverman Hodara: Hi everyone, I’m Judith Silverman Hodara, a founder and director of Fortuna Admissions. We’re so glad you’re able to be with us today. I’m excited that we have with us Cassandra Pittman, who is one of the expert coaches in our team. Cassandra has a wonderful profile to be able to talk with all of us about some differences between applying internationally and domestically, and also an overall sense of a timeline for individuals who are think of applying one or two years from now and how they can start to build up their profile. Cassandra comes to us with an MBA from Columbia, as well as an associate directorship at INSEAD, and also an officer of admissions at London Business School – so a wealth of knowledge to share with us. Thanks so much for being with us and really glad you’re here.

Cassandra I wanted to talk with you a little bit about what students can do that they’re thinking a little further on down the line. You know, this is May and June, a lot of people graduated from college, they’re starting their first jobs. How do they start to think about: I might want to apply to business school in two or maybe three years, what should I start to work on in terms of my profile, the way that I might be presenting myself eventually?

Cassandra: It’s an interesting question because, as you know Judith, we work with candidates who are so smart and so capable, and they all have really great careers and probably been involved in lots of great extracurriculars. But the problem is that everybody in the pool is like that, you know? We’re always working with really smart really capable people who have achieved a lot to say, ‘But how are you different from everybody else who is a consultant or a banker or whatever it is that you’re doing?’

So I always encourage people to really get out there and get some solid leadership experience no matter what that looks like. And it should align with their passion, whether that’s in volunteering and going and building houses – don’t just be somebody who builds, be somebody who organizes to go to build. If you want to start a company, you don’t have to start with Tesla, you can start with little property to learn about entrepreneurship and to show that you have that gumption and that you can achieve those things. And I think if you can start that two or three years out it really looks authentic.

Then when you come to Fortuna and you work with us we’re going to help you communicate that narrative and help that stand out in the way that it needs to, but it’s a lot easier for us to do that if you’ve been doing it for a couple of years than it is if you start three months before you’re applying.

Judith: I agree with you though, and sometimes I say to students: ‘You’re doing something now and you like doing it, but within two years you need to continue some leadership in that. It’s great that you like working at the ASPCA, but after you get settled wherever you’re living, let’s see if you can maybe run a day or be in charge of a certain event, or something like that, so you see that kind of growth curve of leadership outside of work.’

Cassandra: The other thing I would say is if you’re a year or six months out of university or college and you think you want to go to business school, maybe take the GMAT now, while you’re still academically used to that, and used to studying, get that out of the way. Because certainly for me, I applied to business school when I was 29 and it had been a long time since I had to properly studied and I had to relearn pretty basic math. So, if you know you’re going to do that in the near-ish future, I would say just check that box.

Judith: What would you say for students that are coming out of college, university, with an undergrad that is non-business or non-quant related? Any advice for how they might continue to or build on their quantitative background, which we all know is going to be required for business school application?

Cassandra: Yeah, absolutely. First of all, I wouldn’t be intimidated by that. Particularly sometimes we work with women and I think they’re very intimidated by not having a quant background – and I felt personally, this is sample group of one! – that my liberal arts background gave me an advantage in business school rather than a disadvantage. I had a history of learning to think critically and all of that sort of thing. You do have to be comfortable with a basic amount of math and quants though in order to pass. But if you’re smart enough to get good grades in a liberal arts degree you’re smart enough to learn this math. I would say don’t be intimidated by it, it might involve investing in a course. For me it absolutely did, I had to take a GMAT prep course, in fact, I had to take two, but I took it and I actually thought, ‘that’s a little bit fun, it only took you 20 to 29 to figure that out.’

Cassandra: So, don’t be intimidated, just put the time in and learn it and do your GMAT, and you’ll be fine. Also, when you’re on campus, when you’re in class, don’t be afraid to lean on your classmates, you know? We all have different strengths and different weaknesses, and the beauty of the system of working in small groups for a group grade is that you bring those strengths. In my teens what I found is that I would do a lot of the writing for the reports and things that we had to do, and my team helped me a lot with projects in corporate finance and things that might not have come as easily to me.

Judith: It was kind of a balance. One other piece of advice that I generally give to students that are thinking about applying is to take a quant class, either online – there are a number that are available – or at a local community college. When I was a Wharton, where I was for about a decade, we would say take finance, statistics, or accounting, because you don’t really want to show up at business school thrown into the deep water, kind of on the cold side.

And it’s never a bad idea to bolster, regardless of what you studied for an undergrad, but to kind of keep those things moving. I agree with you this goes along with just having graduated, get that GMAT or the GRE out of the way and then continue to take classes, you can also do MOOCs online. I mean, they’re so pervasive and what a wonderful opportunity.

I think that the learning is going to be harder to start again if you don’t kind of keep it moving throughout those two or three years before you apply, so that’s another tip that we like to share with folks.

Cassandra: And like you said with the MOOCs, I mean there’s just no excuse. I went into human capital consulting just after graduating but I also started a company with a friend of mine who is a designer and I do all of our financial statements, I do all of our financial analysis and I never would have thought that I would be in that position, ever. So you never know, you never know where things will lead in life.

Judith: That’s great, that’s a great way for us to wrap up this conversation. Thanks so much for joining us, we look forward to seeing you again during our next discussion. 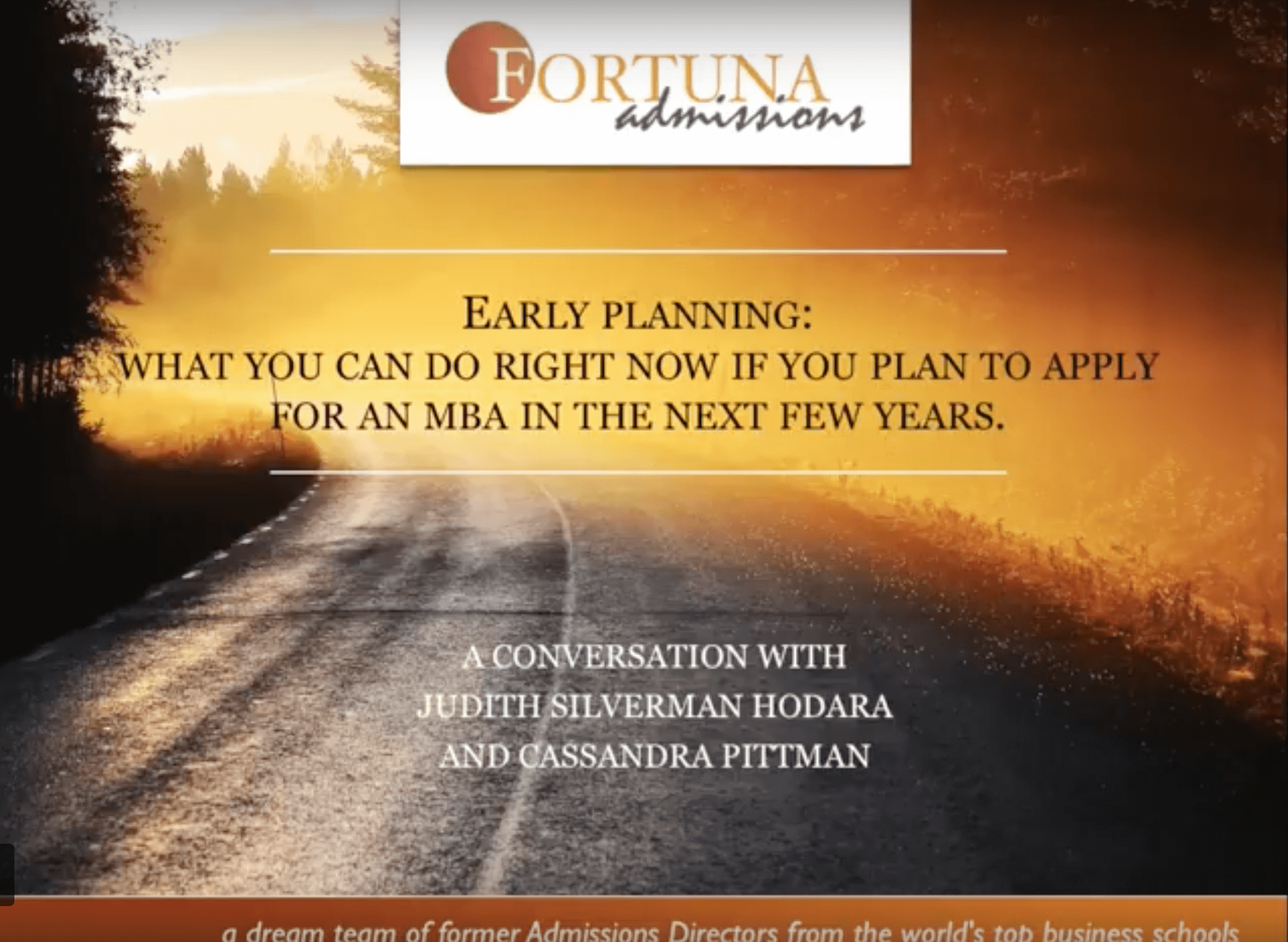