Judith: I’m Judith Silverman Hodara, a founder and director at Fortuna Admissions, which is a boutique MBA admissions consulting firm. So excited to have with us today Cassandra Pittman. Cassandra has both an MBA at Columbia Business School, has worked as an Assistant Director at INSEAD, as well as admissions officer at London Business School. So, she’s one of our expert coaches, she brings an incredible depth of knowledge; not just at about the schools she has worked for, but about the admissions process as a whole. Thank you so much for joining us. I wanted to talk a little bit today about a question we get a lot on our webinars, and that’s about age – chronological age – and when is considered too old to apply, when is not old enough to apply, and then as an ancillary question, how does that impact the classroom dynamic? I think that when I was and Wharton and I’m sure when you were at LBS and INSEAD, you talked a lot about is 28, 29, 30? Where does that fit? What about 22, 23? And then from your CBS experiences, how did that impact the classroom for you as well? So, how age was considered during admissions discussions?

Cassandra: I think there are two main things to look at on the admissions side when it comes to age. One is: they’re looking for high potential. So if you have been working for 15-20 years and you haven’t quite achieved your potential, let’s say, it’s hard to make the case that you really are a high potential, and that you belong in this group. So, I would think of it less about the age and more about work experience. If you went off and maybe were in the army for a couple of years, and then got some business experience, and maybe were a little bit older, I think admissions committees really like to see that. But if you’ve just kind of gotten yourself into low-middle management after 20 years then it’s hard to make the case that you’re really a high potential.

The other thing to consider is are your career objectives realistic given your age? For example, I was 30 when I started CBS, I was 32 – just about, I think – when I graduated, and I went into consulting. That was great, but my peers who were making exactly the same amount of money as me were 26 and also just graduates from full-time MBA programs. I had a lot more experience than them, I was older than them, and they were suddenly my peers. And that was okay for me, but it’s something that people really have to consider. Had I been five or 10 years older, I’m not sure that the same consulting firm would have hired me; they would have had concerns about my fit in that role in the organization. I think that those are two things to think about.

To address that, Harvard, Stanford, Yale, they do have the 2+2 program that allow you to mature a little bit and gain that professional experience before coming back for an MBA. But it’s interesting; this time of year we do talk to a lot of people who are planning out already a couple of years in advance, and how to talk them through when is the right time to apply. The other thing is to keep in mind is, of course, some schools are notorious for looking at students who are a little bit older and are not concerned about that. When I was at Wharton, the average entering age was 27, so it was skewing a little bit higher than some of the other programs… as well thinking about the executive program. So it gets to a point where, if you’ve had a lot of experience and you’re in your early 30s, maybe the two-year model isn’t going to work for you, and maybe it’s a great idea to do an executive program every other weekend, etc.

Cassandra: Right. Two thoughts on that. One is it’s as much about your peer group, and you’ve mentioned you need to get a look into that group and also want to receive from that group, and if your mid 30s or early 40s you’re probably going to find that you have more to both give and get from an older cohort. And the network is, in my opinion, at least half the value of the MBA. The second point is, and again particularly for people who are on the younger side and maybe a little bit anxious to get into business school, what I used to always counsel people when I was at INSEAD and now when people come to me at Fortuna, is I say ‘when you first start working the learning curve is really steep, and there’s a number of years that every year you’re growing and you’re learning and then at some point it just start to tack off a little bit and you realize, okay now I’m a little bit plateauing and how am I growing and learning and that’s the time to sort of plan for your MBA.’ If you’re still learning and growing at this [steep] pace take a few more years, learn and grow. So you have, like you said, something to give and a better plateau to jump off your MBA program from.

Judith: I think again that’s definitely relevant this time of year when… sort of May/June seems to be a big shift; it’s not so much the beginning of the year, January, as it is now because everybody knows that the application deadlines are sort of September/October. I’m so glad we got a chance to talk about this really important topic today so thank you so much.

Cassandra: Thank you, thanks for having me. 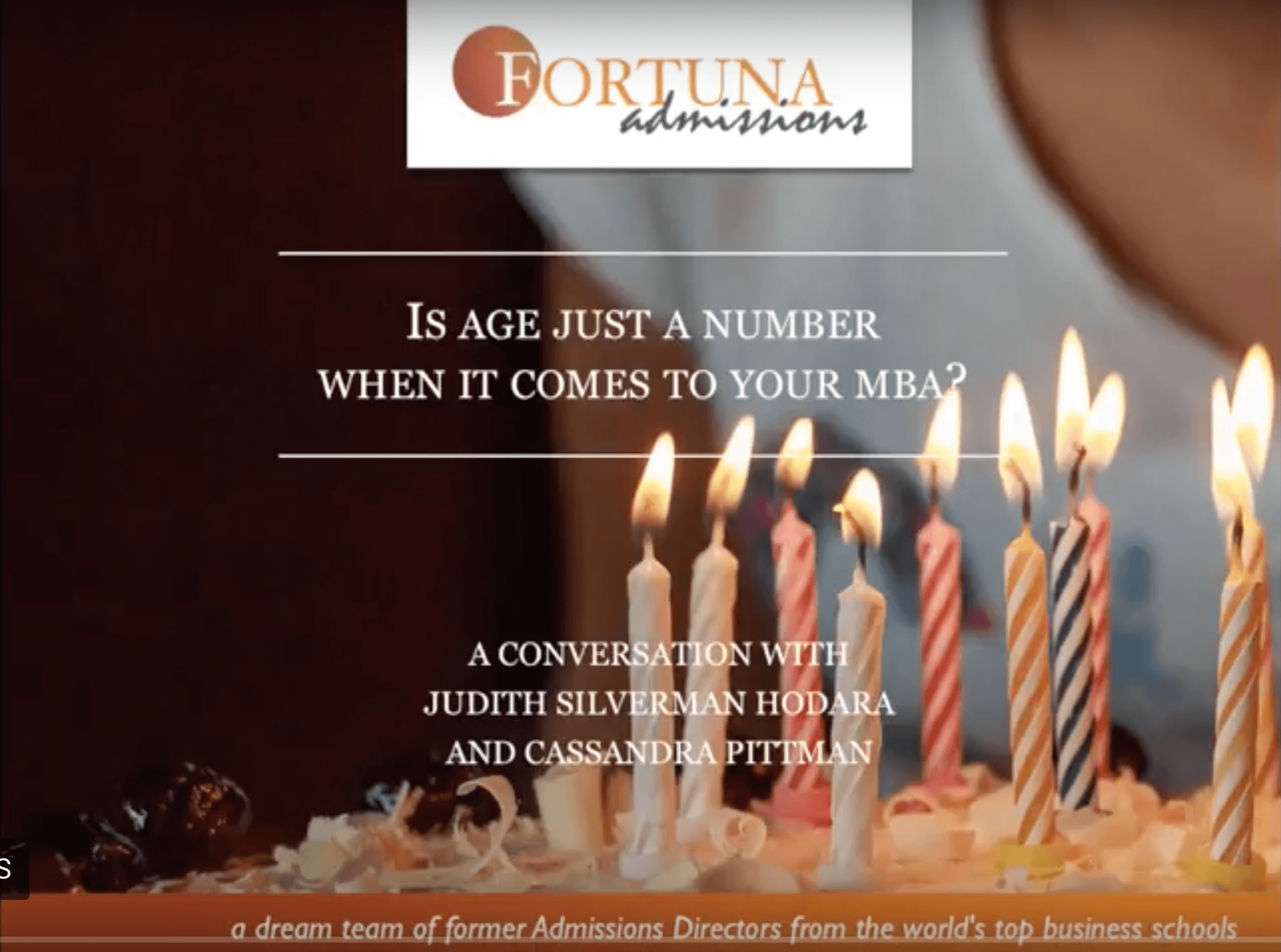