For the fifth consecutive year, Fortuna has compiled the results of the big five MBA rankings of the last twelve months to produce the Fortuna Ranking of MBA Rankings 2015 – US Business Schools.

Though Stanford GSB might be the school of the year in terms of MBA applicant numbers and selectivity, when it comes to the 2015 rankings Harvard Business School has returned to the #1 spot on the back of the school’s top placement in the FT and BusinessWeek. Stanford meanwhile falls to #3.

Chicago Booth maintains the #2 position, with Wharton narrowly maintaining it’s place at #4 ahead of Kellogg, whose consistent results across the board were led by strong showings in Forbes and BusinessWeek. The fabled M7 schools occupy the first seven places in the ranking of rankings, but UC Berkeley Haas, which is one of only five business schools to make the top 10 in each of the media rankings is only fractionally behind this group.

Yale SOM makes the top 10 for the first time in 2015, based on consistent results that range from #9 in the FT to #13 in The Economist and US News. Meanwhile the change in the methodology at BusinessWeek which saw Duke Fuqua lose the crown it held last year has resulted in a fall of three places in the overall ranking of rankings to #12. UCLA Anderson maintains it’s steady climb of the past three years to take the #13 spot, and UT Austin moves back into the top 20 on the back of the strong ROI calculated by Forbes.

Should schools be more selective about the rankings they participate in? Beyond the top 20, neither Texas A&M nor Brigham Young appear in the international rankings of the FT and The Economist, relying on their solid performance in the three US media rankings to forge their reputation. Indeed the volatility of the results at BusinessWeek and The Economist, including many double-digit rises and falls, undermine what is already a hotly debated measure of quality.  In rankings we must? 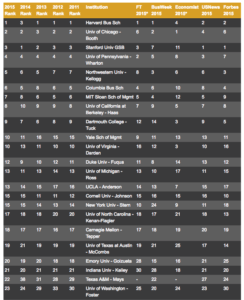 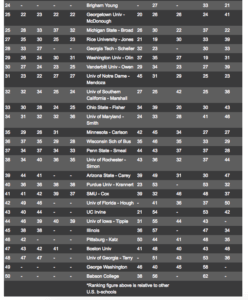 Only the U.S. business schools are ranked by all five major media rankings. Fortuna has calculated their overall performance by looking at each ranking position compared to other U.S. schools, and taking an average of those results divided by the number of rankings in which they appeared.

The idea of the Fortuna Ranking of Rankings is to compare the performance of schools in multiple rankings, and therefore does not include the many good U.S. business schools that appear in fewer than three rankings.