Fortuna has compiled the results of the big five MBA rankings of the last 12 months to produce the Fortuna Ranking of MBA Rankings 2014.

How do the top business schools in the U.S. perform when you combine these results? The big news among the top US business schools is that Stanford GSB has displaced Harvard at #1, based on its top ranking in Forbes and US News.

Perhaps even more surprising is the fact Chicago Booth has also climbed above Harvard Business School to #2. Though HBS came top in the FT and shared the top spot in US News, it’s position in BusinessWeek means that when you take an average of the five major media rankings the fall to #3, just ahead of Wharton. These four schools place heads and shoulders above the rest.

Columbia Business School has climbed 3 places to #5, while Duke Fuqua, Michigan Ross, Yale SOM and UCLA Anderson have all had a good year. Further down the list the University of Washington Foster, Rice University Jones, and Michigan State all moved up 5 places in to the top 30. MIT Sloan, UV Darden, Cornell Johnson, largely because of their performance in BusinessWeek. 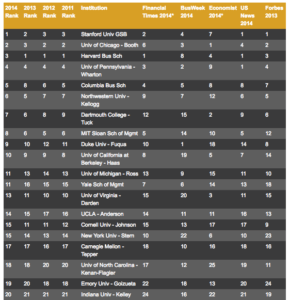 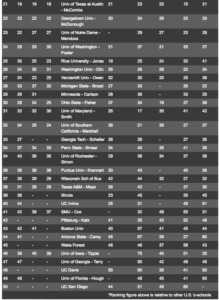 Only the U.S. business schools are ranked by all five major media rankings. Fortuna has calculated their overall performance by looking at each ranking position compared to other U.S. schools, and taking an average of those results divided by five.

The idea of the Fortuna Ranking of Rankings is to compare the performance of schools in multiple rankings, and therefore does not include the many good U.S. business schools that appear in fewer than four rankings.

Matt Symonds is Co-founder and Director of Fortuna Admissions, and bestselling author of Getting the MBA Admissions Edge, sponsored by McKinsey, Goldman Sachs, BCG and Bain.
Share
Tweet
Share