We have compiled the results of the big five MBA rankings of the last 12 months to produce the Fortuna Ranking of MBA Rankings 2011 – US Business Schools.

How did the top business schools in the US perform when you combined the results from 12 months of media rankings? 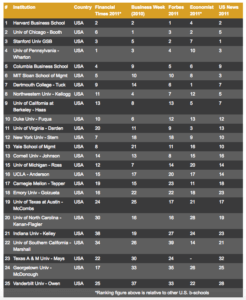 In the case of the FT and Economist rankings, if a US business school ranked #45 in the overall FT ranking and #40 in the overall Economist ranking, but among U.S. business schools was #23 in the FT and #15 in The Economist, then the relative U.S. regional figure was used for the calculation, and added to those of BusinessWeek, Forbes and US News, before dividing by five to achieve an average score.