Earlier this month, Fortuna Co-Founder Matt Symonds sat down with Poets&Quants Editor-in-Chief John Byrne for a deep-dive interview into the Fortuna team’s extensive research profiling and comparing the successful MBA candidates in the Class of 2020 at Harvard Business School and Stanford GSB.

Fortuna’s Deep Dive Analysis covers 95% of HBS & 85% of GSB admits to the Class of 2020. Led by Symonds, our team’s meticulous research identified and analyzed the academic and professional backgrounds of 353 of the 419 students in Stanford GSB’s Class of 2020, along with 893 of the 930 members of the HBS Class of 2020.

All told, we believe it’s the most detailed analysis of HBS vs GSB, two of the most secretive schools, ever published. In doing so, we discerned the specific feeder colleges and employers, actual job titles and undergrad majors of each graduate class. Given the sample size, our results are statistically significant and reliable. (Links to relevant resources like the original Forbes articles, and the 30+ page deep dive reports, at end.)

While you can now view the entire recording – including a fascinating Q&A with participants from the live webinar – here are 12 key takeaways from the dynamic discussion between Symonds and Byrne regarding HBS vs GSB:

WHERE THEY WENT TO UNDERGRAD 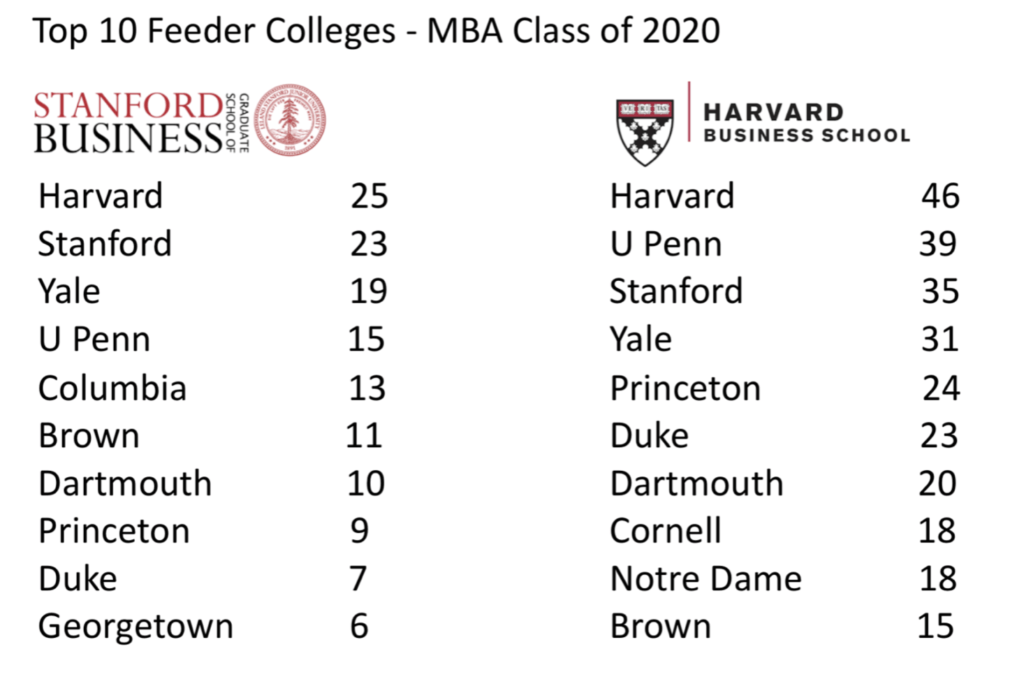 1. More than 1 in 3 GSB candidates went to an Ivy undergrad; for HBS it was >1 in 4.
While Stanford is not a member of the illustrious Ivy League alumni, they’ve taken a higher percentage of Ivy League graduates in the class of 2020 (37% of admits for Stanford GSB vs Harvard HBS, which only has 27% admits compared to 27% of HBS admits). There are a few that are notable by their absence (view above chart). (Where’s MIT?) Columbia made it onto the top 10 list for Stanford; for HBS it’s a little bit further down the list. Notre Dame placed 18 into Harvard in the class of 2020 and six in Stanford’s class. Harvard’s MBA program is about 2 1/2 times the size of Stanford, so a school like Notre Dame placing those strong numbers at both schools is impressive.

2. Half of the HBS class hails from only 24 universities; 53% of the GSB from only 19.
Even beyond the Ivy League, where you get your undergraduate degree appears to be a significant factor in admissions for the MBA programs of both business schools. After the prestigious Ivies, the schools that top the list include Duke, Georgetown, NYU, Notre Dame, MIT, Berkeley, the University of Virginia, Northwestern University and UT-Austin. We also note some interesting subsets. For example, many of Georgetown’s admits at Stanford were at the Walsh School for Foreign Service, indicating a penchant for certain profiles.

3. HBS admits with an Ivy undergrad typically had less work experience than non-Ivy grads.
Now, part of this might be explained by the 2+2 deferred admissions program at HBS, where individuals are applying in their senior year of college. They don’t have four or five years of professional experience, so they’re relying much more heavily on academic achievement when they look at those seniors applying at that early stage. That could have some impact, but it appears that if you have an Ivy League education you can get away with six months less in work experience on your resume for HBS. 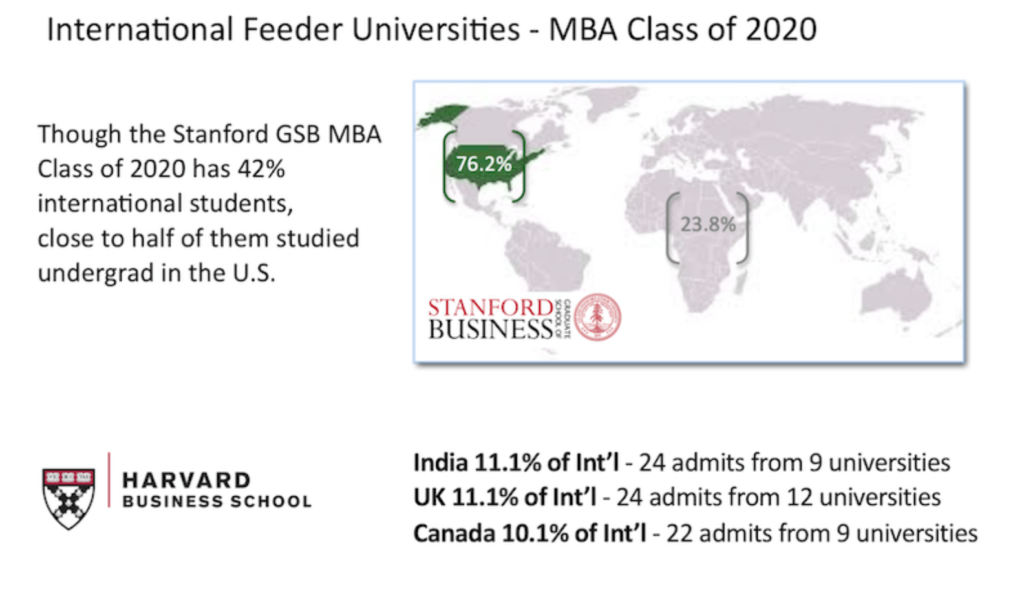 4. A significant percentage of international admits already had a footprint in the United States.
Though the Stanford MBA Class of 2020 has 42% international students, close to half of them studied undergrad in the US. The Harvard class has 37% international students, and over a third of them studied in the US for undergrad. This implies a clear advantage for an international applicant who has already completed their undergraduate education in the US. That said, Stanford had a spike in Chilean students. There were a handful from three or four institutions in the UK, while there were very small numbers from India. For Harvard, about a third of the international students had studied in three countries: India, the UK and Canada. That’s an achievement for Canada, which has a population of 37 or 38 million, compared to the 1.3 billion in India. As you go down the list you’ll find Brazil is number four, and Australia is in the top five or six.

5. Economics is the dominant major among admits to both HBS & the GSB.
We see big numbers from institutions like Yale, Princeton and Harvard undergrad who studied Economics. In looking further down the list of feeder schools, it’s interesting to see a school like Duke with a more eclectic mix, sending student majors in Chinese Studies and Archaeology. Many of the schools that provided applicants in ones or twos is where you would see the BBA program (e.g. Texas, Berkeley and Michigan). You’ll notice a lot of engineers from the international crowd, though economics is a clear winner. The full deep dive reports cite all the major or degree programs that people had taken.

6. A shift away from liberal arts in favor of admits with an undergrad in STEM.
It’s also noteworthy that we’re not seeing many admits who studied Art History. We’ve already noted the shift away from liberal arts through more and more successful applicants at these top schools with a STEM (Science, Technology, Engineering or Math) background. Meanwhile, Finance was the top major for Wharton undergrads who got into Harvard and Stanford. It was similar at NYU, while History was the most recurrent undergrad at a school like Dartmouth.

WHO THEY WORKED FOR 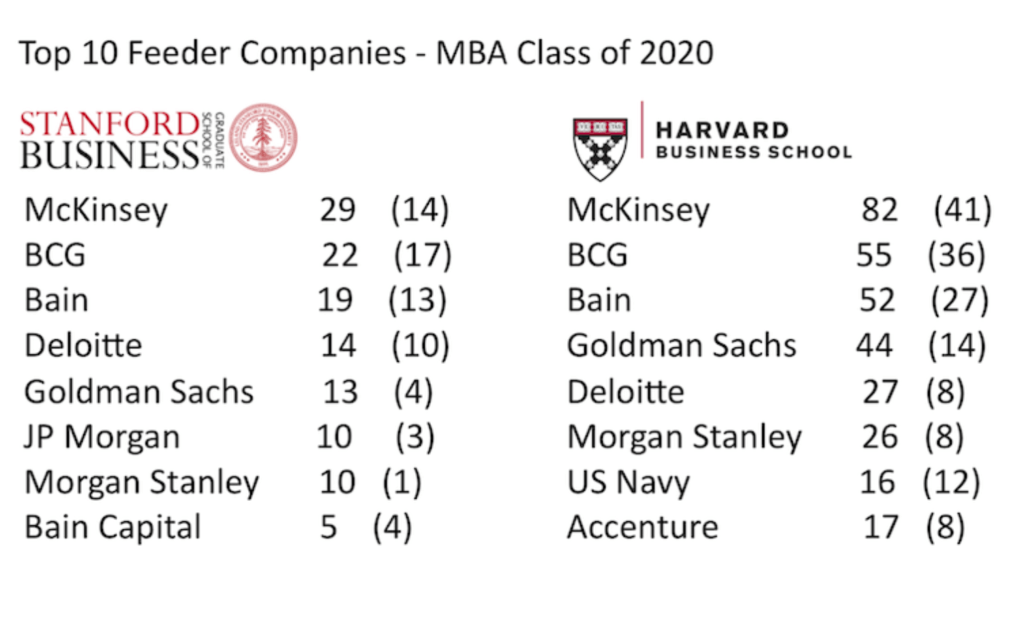 7. Applicants from McKinsey, Bain, and BCG get clear preference from HBS and Stanford.
At HBS, 21.2% MBA students had worked at one of the three global consulting firms (slightly more than one in five). The GSB reveals a similar picture, with 19.8% of the class having worked for MBB. It speaks to a number of factors: the networks that those individuals benefit from, but clearly these are among the most prized employers for graduating college students, and they have very rigorous recruitment standards. Deloitte also makes a strong showing among the “big four” for both HBS and the GSB: Deloitte is #4 on the Stanford list and #5 on the Harvard list. 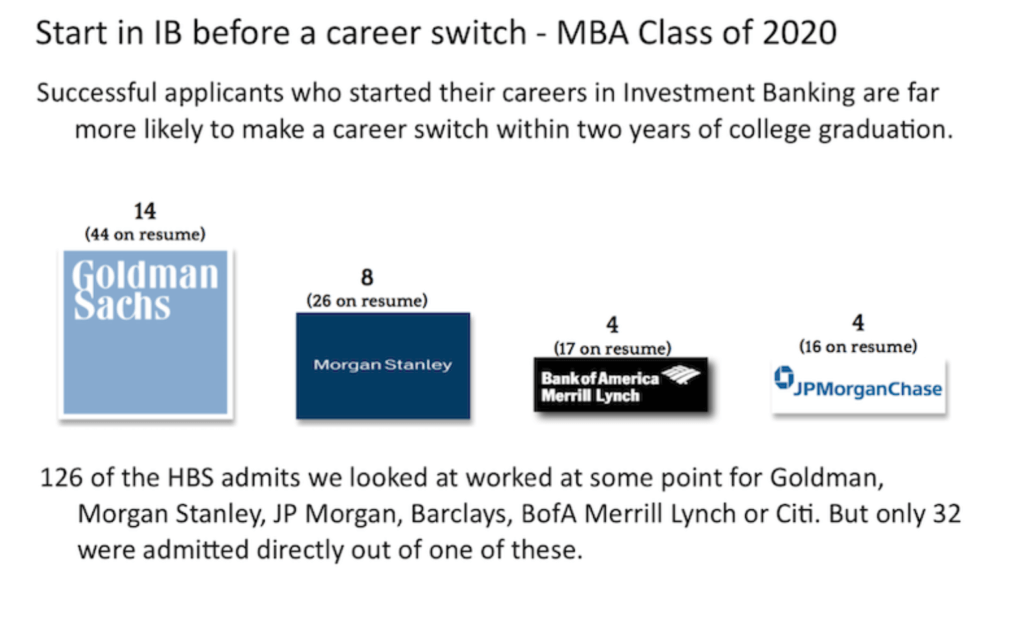 8. A big bank is a great place to start your post-college career.
The advice still rings true: financial institutions are still some of the best feeder companies to top business schools. Candidates from a top-tier bank, such as Goldman, JP Morgan, Barclays, Morgan Stanley, Bank of America or Citi, account for 14.1%, of the MBA students in the Harvard class. For the GSB, financial services is the biggest feeder industry with 21% of the incoming class, and of those, close to half come from Private Equity. Noteworthy is just how many admit started at a big bank, then move on after perhaps two years of a rotational program, indicating that it’s a great place to launch your career. Those applicants often get an interesting position working in PE or VC, and that seems to really work for HBS and Stanford. Far fewer of those individuals are still with JPMorgan or Morgan Stanley by the time of their application to these schools.

9. The big tech firms were also well represented, such as Google, Amazon and Facebook.
That said, tech was not nearly as dominant as consulting and banking. At Harvard, 5% of the class came from just five tech firms: Google, Apple, Microsoft, IBM, and Uber. At Stanford, Google is ahead in tech with five students in the class, while Facebook and Amazon each have four. Three students had worked for YouTube, while only one came from Apple. Meanwhile, Microsoft sent the same number of students – two – as the Bill & Melinda Gates Foundation. (Some seven enrolled Stanford candidates worked in philanthropy, including the Obama Foundation). Upward mobility in tech sees admits from the sector averaging less time in their pre-MBA positions, while those from industry spend longer in each position.

10. For an MBA Class that’s 2 ½ times the size of the GSB, Harvard had fewer entrepreneurs.
Beyond startup experiences during college or outside of their day jobs, it seems that entrepreneurs are more favored at Stanford vs Harvard MBA programs. Only 21 candidates among the 893 we identified applied to HBS from a full-time entrepreneurial venture. Almost all identified themselves as Founder / CEO, with fewer than one quarter in tech. Meanwhile, a core group applied to the GSB from a full-time entrepreneurial venture (26 of the 353 we identified).

11. Both HBS and the GSB have more female than male consultants.
Interestingly, in both Harvard and the GSB have more female students who were consultants pre-MBA than males. Given that the percentage of women at top consulting firms is probably not much more than 30%, maybe even less, this insight is remarkable. You see a complete reverse, and far steeper, when it comes to banking – there are more male bankers at both schools. Consultants, on average, have one year fewer of work experience than candidates from other sectors. Beyond consulting, female admits to both schools tend to have less total work experience than their male counterparts.

12. Almost all HBS admits from the industrial sector were women.
It’s also noteworthy how many successful women applicants came from industry – particularly for Harvard Business School vs Stanford Business School. As the school looks for patterns of leadership, perhaps the idea of imagining a woman professional in a male-dominated offshore oil rig is a plus. Being able to talk about how you’ve managed to successfully thrive in a male-dominated environment is something that connects with the admissions offices. For tech, the gender balance was about half and half. On the software side it was dominated by men, while at the product management level, there was far more gender balance. 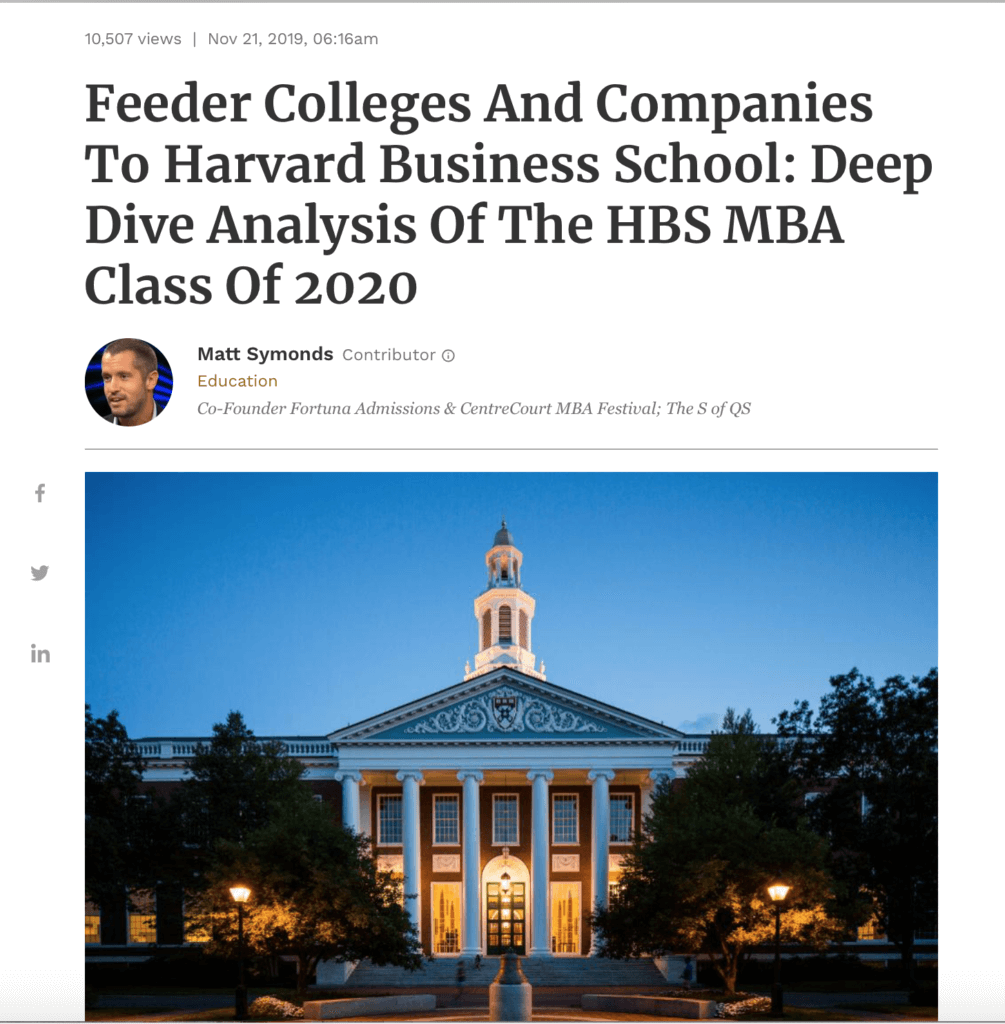 For more insights on each school and its admits – including the specific feeder colleges and employers, actual job titles and undergrad majors of each class – check out our original reporting:

Request your copy of the HBS and/or Stanford GSB Deep Dive Analysis Reports (37 and 23 pages of detail, respectively) 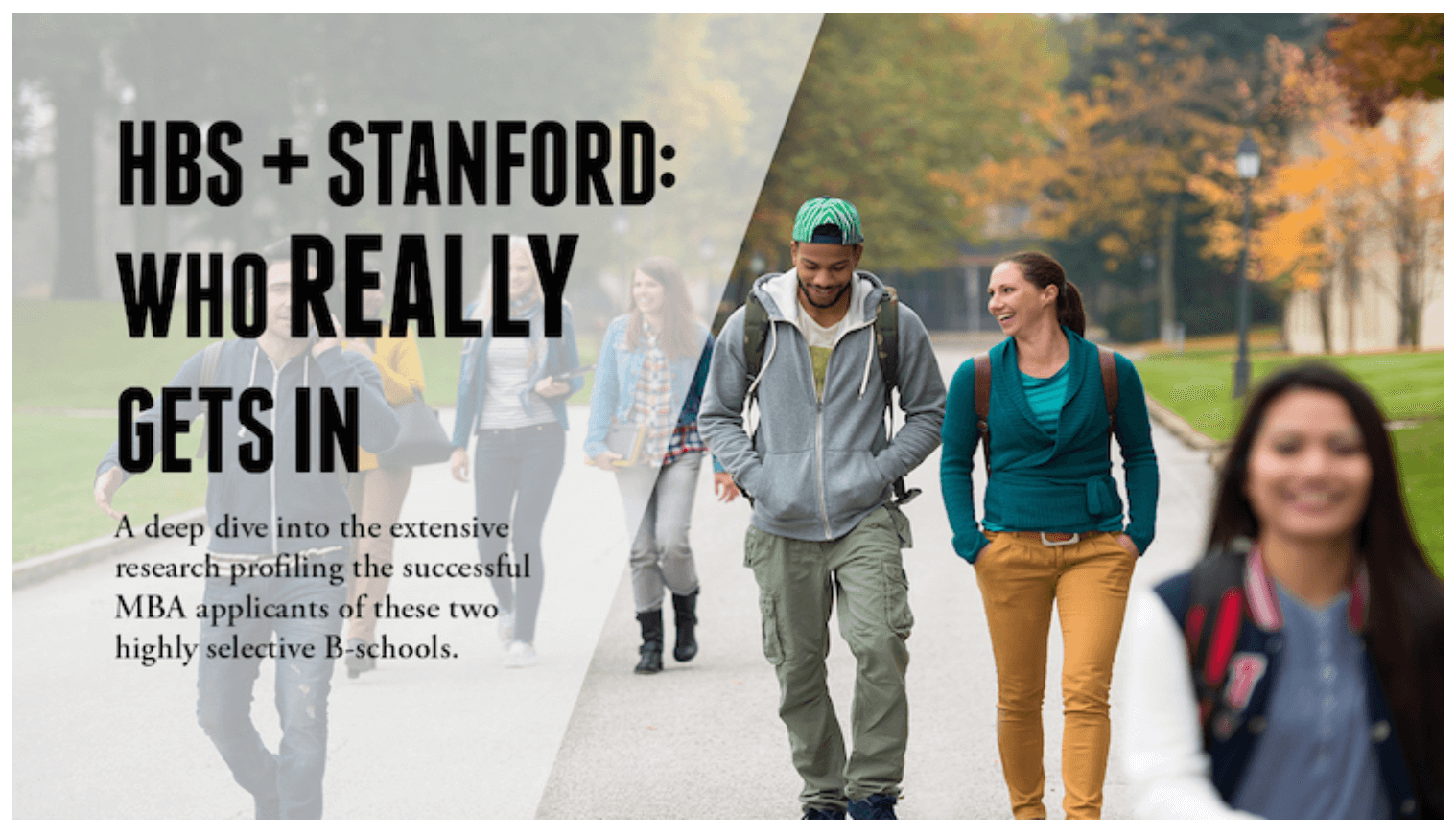